Skip to content
Homekeratoconus- my story, pt 3 by Wendy

In my last blog post I left you at about the 6 week post-op point and since I have been suffering badly with severe dry-eye syndrome. The horrid feeling of a foreign body in my eye and at times it is quite light sensitive and to be honest it’s driving me mad I want so much to rub my eye but do resist!

The photophobia was getting worse so I tried to get an emergency appointment with the e-clinic but no joy for today so I decided to go the local A&E and wait to be seen. I waited around 3 hours and I’m seen by a nurse as they apparently don’t have any on-call eye Dr so really the trip has been a waste of time as they don’t really know what they are looking at. They tell me they can’t see anything wrong so I came home. I get an appointment for the e-clinic and I see a trainee optom who was very nice and took the time to talk to me and asked many questions. She eventually diagnosed me with Punctate Epithelial Erosion Staining (PEE’s for short) this is all connected with the dry-eye syndrome apparently. She prescribes me Celluvisc vials to be used every 2hrs.

Punctate epithelial erosions are a pathology affecting the cornea. It is also known as punctate erosive keratopathy or superficial punctate keratitis 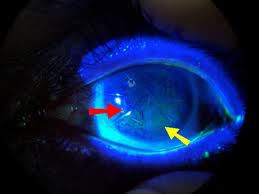 It is a characterized by a breakdown or damage of the epithelium of the cornea in a pinpoint pattern, which can be seen with examination with a slit-lamp. Patients may present with non-specific symptoms such as red eye, tearing, foreign body sensation, photophobia and burning.
Cause
Punctate epithelial erosions may be seen with different disorders:
• Dry-eye syndrome
• Blepharitis
• Acute bacterial conjunctivitis
• Trauma
• Exposure keratopathy from poor eyelid closure
• Ultraviolet or chemical burn
• Contact lens-related disorder such as toxicity or tight lens syndrome
• Trichiasis
• Entropion or ectropion
• Floppy eyelid syndrome
• Chemotherapy i.e. cytosine arabinoside
• Thygeson’s Superficial Punctate Keratopathy
The main thing is my graft shows no sign of rejection which was the main worry with some of the symptoms I was having. I haven’t found that the Celluvisc is doing much and I don’t want to overuse this as it may cause more problems. My next appointment isn’t until my 3 month check on the 19th February so I will just wait and see what happens then.
Minor mishap time!
Well for any of you that know me you will understand how clumsy I am at times. I banged my head on the sink when getting out the shower and it just happens to just above my grafted eye so I go to minor injury clinic to get checked over and everything appears ok. They tell me to come back if I feel sick or dizzy etc. Later that afternoon I have the worst headache ever and for some odd reason my ungrafted eye has very little vision so I call the hospital and they tell me to come back. They do scans and everything as by this time I have an egg shaped lump above grafted eye and its getting bigger. They diagnose it as an Oedema (Oedema, also known as dropsy, is the medical term for fluid retention in the body, the build-up of fluid causes affected tissue to become swollen. The swelling can occur in one particular part of the body – for example, as the result of an injury – or it can be more general) and give me drugs to reduce the swelling. I am kept in over night as a precaution and they give me morphine for the pain. I get home the next morning and just need to rest up.

It’s the start of February and I was trying to think of some way I could help raise more awareness of KC and also to promote the Keratoconus GB Group and the good work Rae & Steven do. I decided to send an email to my local paper to ask if they may be interested in doing a story. To my surprise I get a reply back the next day saying they want to talk to me to find out more. I do an interview and explain everything to the reporter, the next day a photographer came to my home to take my picture. The story is printed the following week in the Valentines Day issue. It received a lot of positive feedback and was shared via the KCGB page and Twitter feed, which was great for raising the profile of keratoconus and people living with it in the UK.

Another good thing for me to come from this article was connecting with two people that live locally to me that also suffer from KC, whom I hope to meet up with soon.

It’s now the 19th February and I have my 3 month check up. After examination under the slit lamp it appears I have 3 loose sutures so these are removed. It appears that this may have made my previous symptoms worse as I also had a mucus build up and this was causing discomfort. The relief after these being removed was pretty much straight away and since then I have hardly needed to use the Celluvisc or Vismed. The Dr said I need to wait until next week then I can reduce my Dexamethasone drops to twice a day and just to keep using the anti-biotic twice daily as before. In December my acuity test in grafted eye was 6/24 and has now improved to 6/18 so I am very hopeful for the future.
My next appointment isn’t until the summer so here’s hoping everything continues going well!