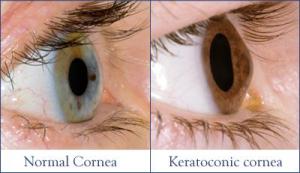 All went well for about 7 months until I had my first bout of graft rejection however this was quickly sorted out. However these problems returned twice more over the next few years. Then it was stable for a time before my vision again started to fail.

After a visit to my consultant he told me the KC had returned in my right eye but above the graft so the centre of vision was now facing downwards this was something he could not correct but he said ‘I know a man that can’.

By way of explanation, to have KC return to a new grafted cornea is rare, and unlucky! It means you are more keratoconic than most with keratoconus.

So in 2008 I had a Right eye DALK over PK done by the renowned Mr S Daya of the East Grinstead Centre for Sight, the graft went great but again the battle with rejection was relentless as my body would just not accept it – again as my brain was saying almost ‘hey where’s the keratoconus gone? This can’t be right’ but we got there in the end.

In 2010 I then had a Cataract op in my right eye by Mr D Lake East Grinstead as the use of so many steroids for the previous rejection had caused the cataract grew at an alarming rate. Post graft cataracts are quite common and treatable however.

In 2011 I faced more treatment with Right eye Macular off retinal detachment at Moorfields London and this was the all time low point for me and I began to think about giving up and just living without full vision but really I was not going to lose now so I carried on the fight.

Then in 2012 I had a Left eye PK graft done by Mr S Khan at East Grinstead as again the KC had returned and the same as the other side had moved the original graft. It was going to be a DALK procedure but once I was on the operating table this was not possible in that eye. Again frustratingly rejection returned and was worse than ever before as it was later explained that every time it happens the body will try harder to reject something it sees as alien.

My brain and body just did not recognise the newly donated and grafted cornea as being part of me and was trying in essence to get rid of it as a ‘foreign body’.

In 2012 my Right eye had a YAG laser Capsulotomy done by Mr P Georgoudis at East Grinstead again to aid clear vision. 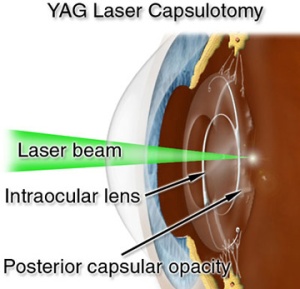 So here we are today still on the road to recovery. My left eye has a large astigmatism and a cataract forming so once my stitches are out we should be able to sort out the issues at the same time. The rejection is now under control with drops and a large dose of cyclosporine tablets each day.

As you can see my WAR with KC has been a long one and is not yet won. I call it a war as it’s a constant fight and I have been through many battles but with the help of many great people it’s one that is being won and I will not give up- also I want people to know about my story as whilst it is unique to me it is important to share all aspects of keratoconus, the good and the bad.

I would not want anyone to think this is the norm but I thought you would like hear my story.

One thought on “Keratoconus – my story, by Ed”